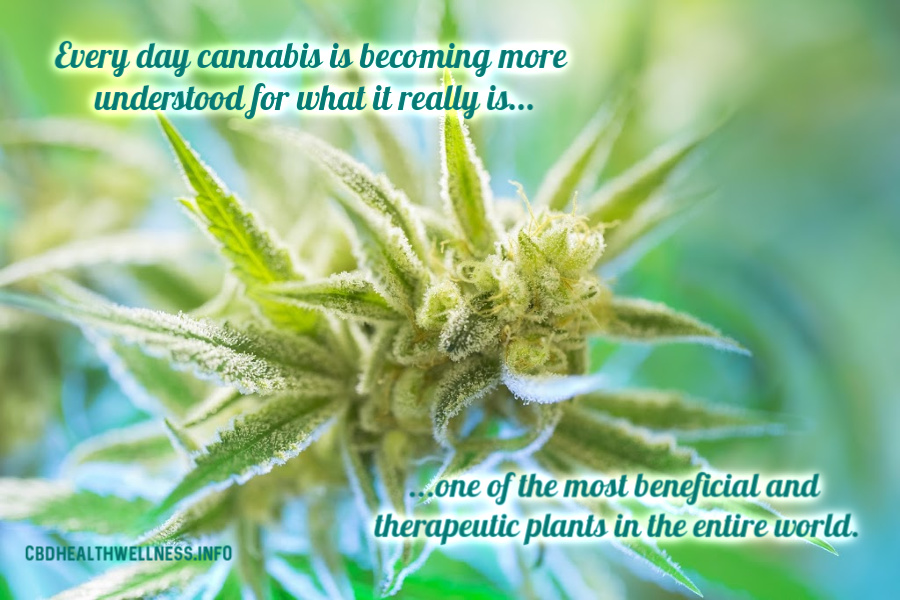 It’s about time because CBD is a fascinating compound that has tremendous therapeutic value.

The list of health concerns and conditions CBD has been shown to benefit include:

Unfortunately, decades of disinformation and outright lies about the cannabis plant have led many to believe that marijuana and hemp are dangerous and have no medicinal value.

Of course, nothing could be further from the truth.

Thankfully, a growing body of research is revealing the abundant benefits of the cannabis plant.

Let’s explore those benefits, but first – let’s talk about what CBD is and what it does in the body.

Cannabidiol (CBD) is one of over 100 compounds found in cannabis that belong to a class of ingredients called cannabinoids.

Cannabinoids are a diverse set of chemical compounds that bind to special receptors in the human body that make up what is known as the endocannabinoid system, explains Medical Jane:

The “key and lock” metaphor is often used to describe this process. The human body possesses specific binding sites (“locks”) on the surface of many cell types, and our body produces several endocannabinoids (“keys”) that bind to these cannabinoid receptors (CB) to activate or “unlock” them. … When a cannabinoid causes a receptor to act in the same way as it would to a naturally occurring hormone or neurotransmitter, then it is labeled “agonist.” On the other hand, if the cannabinoid prevents the receptor from binding to the naturally occurring compound, thereby causing the resulting event (e.g., pain, appetite, alertness) to be altered or diminished, it is labeled “antagonist.” Research is mounting to better understand how specific cannabinoids can unlock (or lock in some cases) specific receptors. … Over 100 phytocannabinoids have been identified in the cannabis plant, many of which have documented medicinal value. Most are closely related or differ by only a single chemical part. The most talked-about and researched cannabinoids found in the cannabis plant are tetrahydrocannabinol (THC) for its psychoactive properties (“high feeling”) and cannabidiol (CBD) for its healing properties.

For more information on specific cannabinoids, please see this impressive reference guide: The Ultimate Guide to Cannabinoids in Cannabis.

What is the endocannabinoid system?

The endocannabinoid system is a biological system which plays many important roles in the human body. It is responsible for the physical and psychological effects of cannabis.

Here’s more on the endocannabinoid system, from Project CBD:

The discovery of receptors in the brain that respond pharmacologically to cannabis—and the subsequent identification of endogenous cannabinoid compounds in our own bodies that bind to these receptors—has significantly advanced our understanding of human biology, health, and disease. It is an established scientific fact that cannabinoids and other components of cannabis can modulate many physiological systems in the human brain and body. Cannabinoids are chemical compounds that trigger cannabinoid (and other) receptors. Extensive preclinical research—much of it sponsored by the U.S. government—indicates that CBD has potent anti-tumoral, antioxidant, anti-spasmodic, anti-psychotic, anti-convulsive, and neuroprotective properties. CBD directly activates serotonin receptors, causing an anti-anxiety effect, as well.

According to High Times,

Without distorting the science too much, you could say that human beings are “hard-wired” for weed. The endocannabinoid system runs deep and touches all of the major systems of the body. And that’s why weed can do so many things for us, from altering and regulating moods to stimulating appetites and reducing pain. And even though cannabidiol has no toxicity for humans—meaning, it doesn’t make you intoxicated (i.e. high)—it is highly reactive with the endocannabinoid system. To put things as simply as possible, CBD makes things happen. When it binds to the endocannabinoid system’s receptors, it stimulates all kinds of changes in the body. Most of those changes are incredibly beneficial, and researchers keep uncovering real and potential medical uses for them. 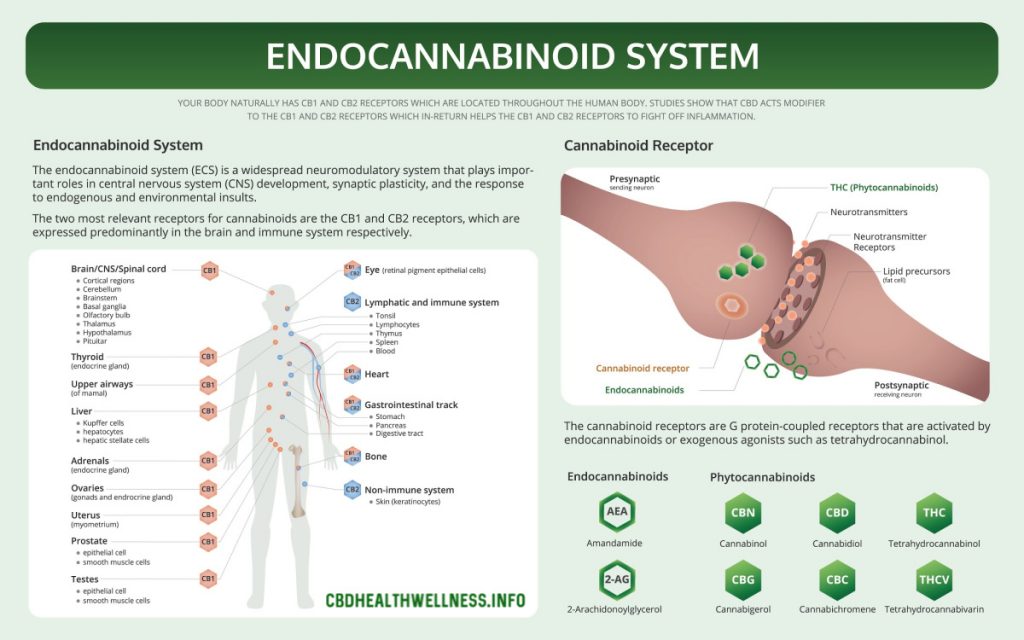 What are the differences between cannabis and hemp?

Hemp is a plant in the Cannabis family.

Here’s an explanation from Medical Jane:

The term cannabis(or marijuana) is used when describing a Cannabis Sativa plant that is bred for its potent, resinous glands (known as trichomes). These trichomes contain high amounts of tetrahydrocannabinol (THC), the cannabinoid most known for its psychoactive properties. Hemp, on the other hand, is used to describe a Cannabis Sativa plant that contains only trace amounts of THC. Hemp is a high-growing plant, typically bred for industrial uses such as oils and topical ointments, as well as fiber for clothing, construction, and much more.

According to a 1976 study published by the International Association of Plant Taxonomy, “both hemp varieties and marijuana varieties are of the same genus, Cannabis, and the same species, Cannabis sativa. Further, there are countless varieties that fall into further classifications within the species Cannabis sativa.”

In fact, scientists believe the early separation of the cannabis gene pool led to two distinct types of cannabis plants. The two species (or subspecies) of cannabis are known as Cannabis indica and Cannabis sativa.

CBD is the same whether it is sourced from hemp or from marijuana, Leaf Science explains:

“CBD, the actual molecule, is the same from both plants,” says Martin A. Lee, director of the educational nonprofit Project CBD and author of Smoke Signals. “Where it gets different is the plant itself.” CBD, like other cannabinoids, is found in the plant’s resin. Resin is concentrated in the flowering tops and leaves of the plant, and is less present in the stalks and seeds.

Tetrahydrocannabinol (THC) is a phytocannabinoid that activates the CB1 and CB2 receptors in the body. The CB1 receptors are generally located in the nervous system, and they are responsible for the psychoactive effect that THC can cause. The CB2 receptors, on the other hand, are more prevalent in the immune and gastrointestinal systems, and play a major role in minimizing inflammation.

For some conditions, a combination of CBD and THC show promise, explains Project CBD:

THC and CBD are the power couple of cannabis compounds—they work best together. Scientific studies have established that CBD and THC interact synergistically to enhance each other’s therapeutic effects. British researchers have shown that CBD potentiates THC’s anti-inflammatory properties in an animal model of colitis. Scientists at the California Pacific Medical Center in San Francisco determined that a combination of CBD and THC has a more potent anti-tumoral effect than either compound alone when tested on brain cancer and breast cancer cell lines. And extensive clinical research has demonstrated that CBD combined with THC is more beneficial for neuropathic pain than either compound as a single molecule.

Project CBD has compiled an extensive list of conditions CBD can help with, based on hundreds of peer-reviewed articles in scientific journals and other sources. To view the list, click here.

For more on the major cannabinoids and their effects in the body, please see this informative article from Leafly.

Cannabis has a long history of medicinal use.

Despite having a long history of use as a natural medicine (the earliest recorded uses date from the 3rd millennium BC), since the early 20th-century cannabis has been subject to legal restrictions. Possession, use, and sale of cannabis preparations containing psychoactive cannabinoids are currently illegal in many parts of the world. In some places, the use of CBD remains illegal, even though the compound is not an intoxicant.

The history of cannabis prohibition is long and disturbing. “Reefer Madness” in the U.S. began in the 1930s. The anti-marijuana propaganda campaign accelerated in 1971, when then-president Richard Nixon officially declared a “War on Drugs.”

The war on cannabis has had serious and tragic ramifications, including the imprisonment of thousands, high taxpayer burdens, loss of jobs, ruined lives, and infringements on personal freedom.

Imagine how many people have been denied the opportunity to use CBD and marijuana in the last eight decades because a few politicians decided it was “dangerous” without any justification.

Thankfully, now there’s hope – as of June 19, 2019, medical marijuana is legal in 33 states and DC, and recreational use is legal in 11 states and DC. Details surrounding possession limits vary by state. Possession of marijuana remains illegal at the federal level, unfortunately – the plant is still classified under Schedule 1. Laws regarding hemp and hemp-based CBD are much more difficult to interpret (these CBD products from Organica Naturals can be legally shipped anywhere in the US, as of the time of this writing).

While the DEA, the federal government, police departments, Big Pharma, and the prison industry have a lot to lose if cannabis is fully legalized, humanity has much to gain.